X-Golf is proud to announce that we have enlisted Paige Spiranac to be our company’s new ambassador! We are very excited to have her on the team, and would like to introduce her to you all!

X-Golf is a premium indoor golf simulation facility with locations across the country, including the Wexford area. We provide several golfing bays with world-class golf courses built into our simulation bays. We also provide food and drink options and party accommodations, all from the comfort of the indoors! Don’t put golf on hold just because of unruly weather. Stop by and let ‘em fly! Read on to learn more about Paige Spiranac, and be sure to visit us soon!

From the moment she created her account, Paige began to be known as the “OG Instagram Golf Girl.” Her account initially started as trickshot golfing videos, but quickly grew into a brand, proving to be much more than just a simple Instagram page. Over the last few years, she has amassed over 2.5 million followers on Instagram.

Her content displays her golfing skills, personal adventures, various companies she works with, and, of course, her dog! We saw her as the perfect fit for our indoor golf simulation business, and are excited to see how our relationship grows over time. Check out her newest post about X-Golf and her excitement surrounding our facilities! 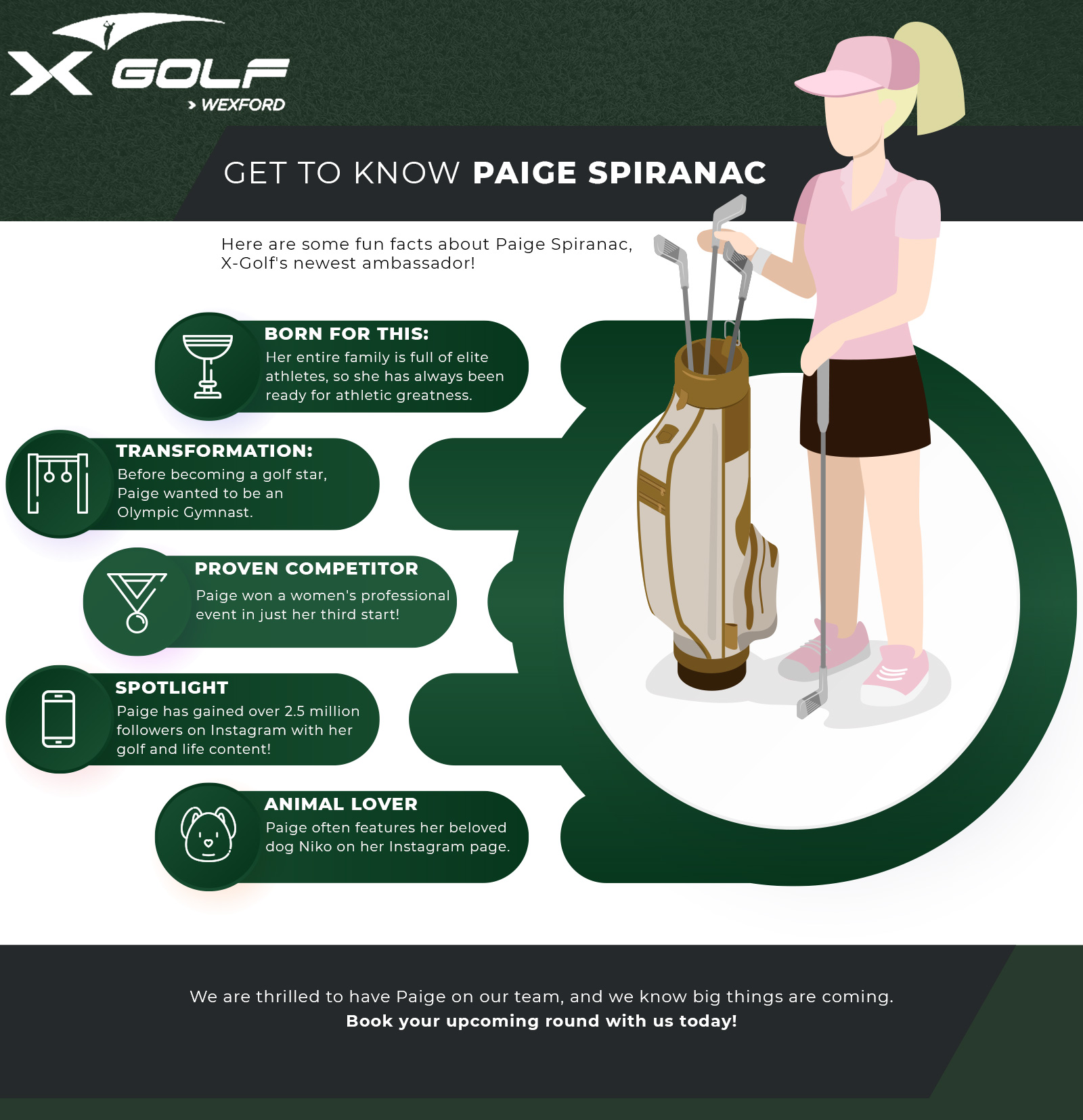 Paige is a former professional American golfer with the attitude and mindset we were looking for. Paige grew up in Wheat Ridge, Colorado, where she fell in love with athletics. Her dad played football in college and was on the championship-winning Pittsburgh Panthers team. Her mother was a professional ballet dancer, and her older sister got a full-ride scholarship to Stanford to be on the track team. As a kid, Paige initially had the determination and dedication to become an Olympic gymnast, but after a few knee injuries in her teenage years, she began to pursue golf with the same passion that fueled her gymnastics dreams. From that point on, golf became her main focus.

Paige began to play in Colorado’s junior golf circuit and quickly ended up winning five out of the seven tournaments she entered into. She was a two-time West Region Player of the Year and was also a first-team All-American on the Future Collegians World Tour. This quick acceleration through the circuits led her to receive a scholarship to the University of Arizona to continue her golf career into her college years.

Paige enrolled at the University of Arizona to begin her college golf career. However, she only competed in three events during her first year of school. She hit a 73 twice that year in the three events she competed in. Her unrecognized talent along with personal issues with the area led her to seek new horizons.

Later that year, Paige participated in the CWGA match play championship. Going up against Brittany Fan from the University of Colorado Boulder, she ended up winning the 35-hole title match and finished 9 strokes under par. This is a truly amazing score for any golfer.

Paige began to participate in the Colorado Women’s Open, where she placed in the top ten. This earned her a cash prize and provided her the title of “professional golfer.” Over the next year, she participated in the Cactus Tour. In just her third event she edged out the number one ranked amateur in the world, earning her first tour win.

While professional golfing was fun and exciting, Paige realized that there was a glass ceiling that women professional golfers could reach. She realized that growing her brand was a better use of her time. After missing the Dubai cut in 2016 (among the various threats she received around that time), she ceased touring and began her career as an influencer.

As Ms. Spiranac can agree with, X-Golf is the premier location for indoor golf. With numerous locations scattered across the globe, our facilities are relatively close to most of our clientele. Don’t limit your golf accessibility to the weather that is present outside. Instead, contact us to learn more about our facilities and the services we offer and be sure to book your upcoming round with us today!